Pliny on Elephants and Dragons

“Africa produces elephants, beyond the deserts of the Syrtes, and in Mauritania; they are found also in the countries of the Æthiopians and the Troglodytæ as mentioned above. But it is India that produces the largest, as well as the dragon, which is perpetually at war with the elephant, and is itself of so enormous a size, as easily to envelope the elephants with its folds, and encircle them in its coils. The contest is equally fatal to both; the elephant, vanquished, falls to the earth, and by its weight, crushes the dragon which is entwined around it.

The sagacity which every animal exhibits in its own behalf is wonderful, but in these it is remarkably so. The dragon has much difficulty in climbing up to so great a height, and therefore, watching the road, which bears marks of their footsteps when going to feed, it darts down upon them from a lofty tree. The elephant knows that it is quite unable to struggle against the folds of the serpent, and so seeks for trees or rocks against which to rub itself. 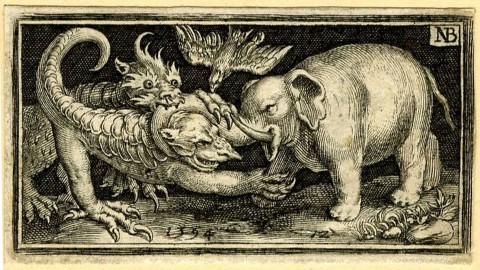 The dragon is on its guard against this, and tries to prevent it, by first of all confining the legs of the elephant with the folds of its tail; while the elephant, on the other hand, endeavours to disengage itself with its trunk. The dragon, however, thrusts its head into its nostrils, and thus, at the same moment, stops the breath and wounds the most tender parts.

When it is met unexpectedly, the dragon raises itself up, faces its opponent, and flies more especially at the eyes; this is the reason why elephants are so often found blind, and worn to a skeleton with hunger and misery. What other cause can one assign for such mighty strifes as these, except that Nature is desirous, as it were, to make an exhibition for herself, in pitting such opponents against each other?”

§ One Response to Pliny on Elephants and Dragons

You are currently reading Pliny on Elephants and Dragons at Annone the Elephant.