A Light Touch Behind the Ear

In wood, brass, paintings, textiles, print and plastic, images of elephants are abundant in Fort Cochin. For live animals you have to go about 70 kilometers north to Guruvayur, the site of a huge Shiva temple visited annually by tens of thousands of devout Hindu pilgrims from all over India. On major festivals more than 50 elephants are decorated and paraded in front of huge crowds gathered to see them and their handlers compete in various ways. The rest of the year the elephants live at Guruvayur Devaswom at Punnathurkotta, a so-called elephant sanctuary. After the initial excitement of seeing more than 50 dark grey hulking bodies with white tusks gathered in one place, a much more disturbing shock sinks in; scattered across the sanctuary the animals are chained to trees and cement posts, rocking, swaying, straining their massive weight against their confinement, signs warn against getting too close or looking too long. Most of them are chained in place by all four legs, the few that have just one or two chains are restrained by a simple wooden pole leaned against their body, the light pressure of the stick enough to keep them still. Imagine the kind of training, the conditioning required to convince an animal to stand submissively for hours with the simple reminder of a light touch behind the ear. 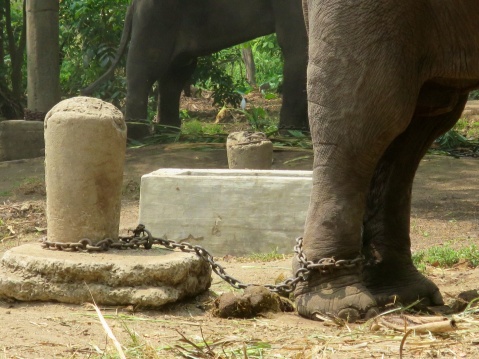 Families stroll, a small child points excitedly and squeals aane. I know it is foolish to read human emotion into an animal’s facial expression, but the eyes of these elephants have a look of seething desperation. Standing in their own excrement, unable to interact with each other except through some kind of subsonic tapping on the prison plumbing, they must be passing coded signals of rage or conspiracy. To be fair, they are fed, given medical attention, washed and worshiped, but these are gods in chains and they look pissed off. 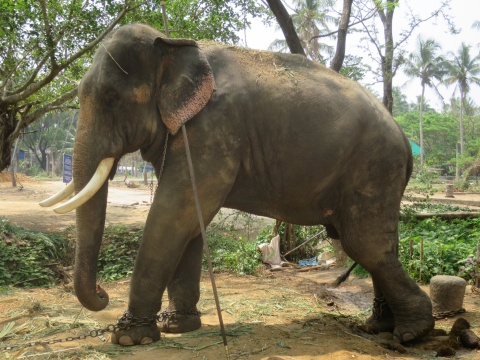 On my last day in Fort Cochin I decide to revisit the salt temple. Retracing my way through the back streets I pass a mill where men in bare feet are guiding hardwood logs through a long, rumbling band-saw blade in dust-thickened air, every surface flocked in dry, dull yellow. A crew is dismantling an old house, carefully unpegging, then unthreading stringers from rafters, stacking the wood for reuse. Inside a 4’X 8’X 6′ blacksmith’s shed beside the stinking green canal one man cranks a blower, another delicately arranges bits of coal with iron tongs, then strikes the red-orange iron billet to make a knife, a pile of blanks cooling beside his bare feet. He gestures me forward to take a closer look, but the heat drives me back from the door. A man walks his bicycle, selling small fish floating in bloody water from a blue plastic crate; chickens are confined in pens, goat families roam casually among lounging cats, one with a fish tail sticking out of its mouth. At the temple I am shocked to find the salt has disappeared and what had appeared to be a pedestal is a four foot deep well. The volume of salt in the cone now doubles, and where is it? I ask the attendant what happened to the salt, he repeats Guruvayor, points to the elephant poster, asks for a rupee.

A cow is blocking half the street ahead and as I frame a photo, I see a much bigger animal walking toward me, a twelve-foot tall bull elephant carrying a bundle of bright green palm leaves between white tusks and pink trunk. The chains ring lightly, its feet make a soft sound of sandpaper passing over asphalt, traffic stops to let it through the confusion of cars, two wheelers and pedestrians. It delicately threads the wide load through narrow streets past a yellow school where children’s excited voices yell aane, aane as it passes the open, turquoise framed windows. Back inside its yard it sets down the fodder and steps onto a cement pad. The mahout loosens, but does not remove the chains, leans a long, brass tipped pole behind the elephant’s huge, mottled pink ear, turns on a hose and inserts it into the animal’s mouth. It runs for a good 5 minutes until the water starts to overflow, the elephant spits out the hose and lets loose a torrent of pee equivalent to the volume of water that just went in. Another mahout collects wads of dung onto a plastic sheet and tosses them onto a pile double the size of the blacksmith’s shed. Beside it are the smoldering remains of a previous dung pile reduced to hot, silver-grey ash. They say luck favors the well prepared. Persistent looking is a form of preparation in action; I was looking for salt and saw an elephant.

You are currently reading A Light Touch Behind the Ear at Annone the Elephant.