A Four-Year Old Asian Elephant at the Oregon Zoo

The Oregon Zoo in Portland, Oregon has one of the most successful captive elephant breeding programs in the world. Their elephants have been closely observed and meticulously cared for since the zoo began keeping them in 1953. Important discoveries in elephant biology and communication have been made at the Oregon Zoo.

The zoo is home to the four year-old male Asian elephant Samudra, known as Sam and sometimes called Roscoe by his keeper, elephant curator Bob Lee. Sam is about the same age as Annone was when he arrived in Rome in 1514.

Elephants vary considerably in size, depending on genetics, diet and other factors. Judging from the relative sizes of the mahout and the animal in Romano’s drawing, Annone appears to have been quite a bit taller than Sam, or else the men in the drawing are very short. The proportions of head to body size are also different in the two elephants. 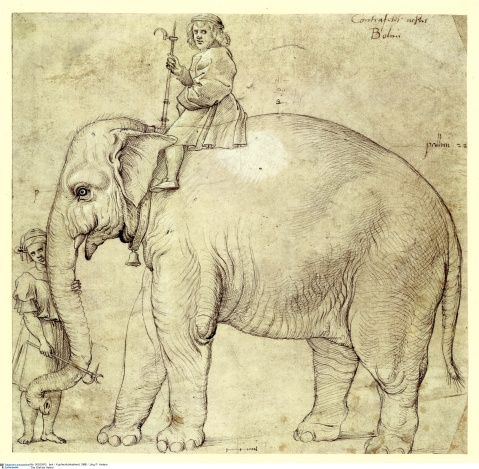 Even at 4,000 pounds, a four year-old elephant is still immature. Sam’s mother will still allow him to nurse. He engages contentedly with a ball, kicking, picking it up and throwing it, sitting and rolling his huge body on top of it, in extended periods of pure play like a puppy or a child. It is reasonable to assume that Annone at age four was physiologically similar to Sam, that he had reached the same level of maturity, had the same ability to learn and desire to play.

You are currently reading A Four-Year Old Asian Elephant at the Oregon Zoo at Annone the Elephant.